We are currently at a lovely state park in Florida, Topsail Hill Preserve.  It is beautiful, with lots of great bike trails and a beautiful beach.  When we got here we got a big suprise;there were other Airstreams!  We usually don't see a lot of Airstreams in campgrounds, maybe one or two, but there were so many. Turns out there is a rally at this park that we landed persfectly in middle of!  Over 70 Airstream campers are here for the Canopener Rally.  We have made a lot of new friends and are constantly learning from them. 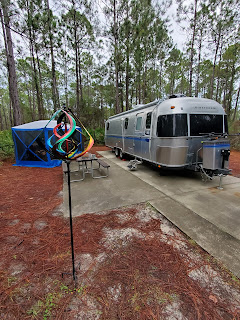 On Tuesday I decided to put up the awning.  We haven't had it up in a while because it's either been too cold, too rainy or too windy but Tuesday was perfect.  As I was lifting the rear support it broke!  The spring unwound and wacked me in the head and arm pretty badly.  There was blood everywhere - head wounds are the worst according to everyone.  So we went to Emergency, probably the last place you want to go to in a pandemic.  But after three hours and lots of bleeding, I got eight staples in my head!

When we left for the hospital the awning was sprawled over the camper half unrolled, half still attached.  While I was getting fixed up, the other campers at the campground put the awning back together so we didn't have to deal with it when we got back!  People are amazing!

Now I'm going to continue with my recap of how we got here.  We left off in my last post dropping the AS at Woodland Airstream in Grand Rapids in February. 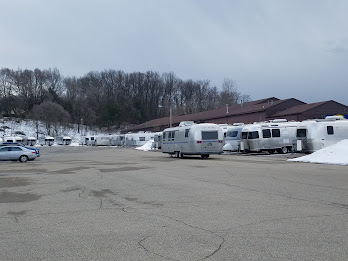 They set to work and then Covid hit. The dealership was closed for a couple months, but so was everyone so we understood.

I made a "before" video at the dealership.

We picked up the completed camper on May 7.

Meanwhile, we scheduled The Dry Campers, a couple who travel around installing Solar systems on RV rigs, to come work on our camper. They had a great way of working.  We ordered all the parts they would need to be delivered to our house before they showed up.  Then they camped near by, Mike worked on our camper during the day and they get to enjoy a new part of the country. They were at our house the first week of June and put in 900w of solar panels and 4 lithium batteries. I highly recommend working with them.  Mike and Leanne are just great people.

When Mike pulled up the floor to put in the batteries he discovered some black mold! It wasn't bad but we decided to pull up the the laminate floor and take out the cork floor a previous owner had installed. I marked the existing laminate and reinstalled it - badly I will admit.  We should have replaced the floor at that time but didn't.

I started working on the interior. We decided to use the Moose picture that was in the camper when we got it as our theme. I didn't care for all the oak and decided to paint it all.  I went with Annie Sloan paint because it covers everything.  It was a huge learning curve getting it right and I'm still touching it up where I didn't get it on correctly but I love the look. 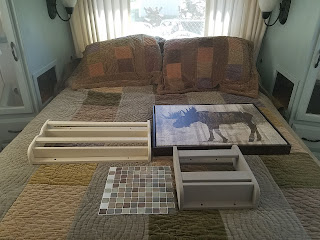 The jackknife sofa was in dire need of reupholstery. 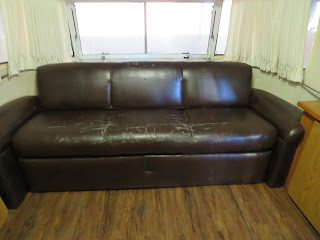 I wanted to use the leather from our sofas in our home.  It was buttery soft and the perfect color.  I called around to find someone to do the work but most people said it was impossible.  Finally found a wonderful man in Holland who said he would take on the challenge.

I "skinned" our old sofa and loveseat and delivered the leather and sofa to him.  He did an amazing job. I even convinced him to make a poof, an empty storage pillow for blankets and extra clothing. 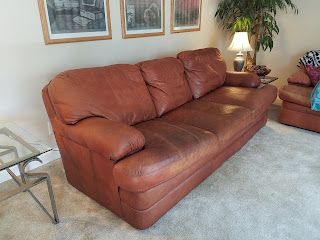 I loved this sofa, so comfortable 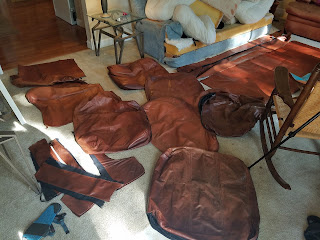 Leather after skinning it and the loveseat. 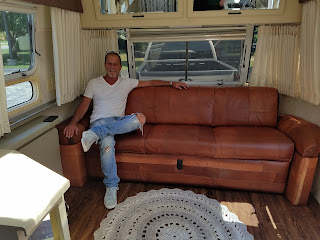 Randy, the artist who did the work. 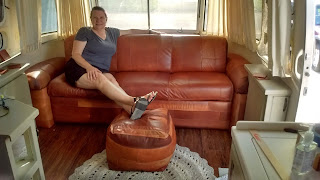 The sofa and the poof! 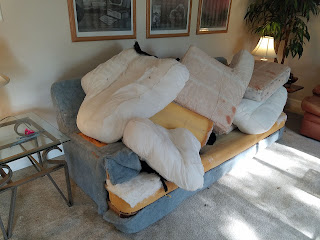 The leftover sofa and cushions were reused by our good friends the Spratts.  Randy did an amazing job for them as well.
I put up press-on wallpaper in the bedroom, bathroom and main room. I installed press-on tile in the kitchen. The difference was amazing. 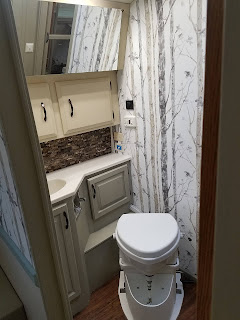 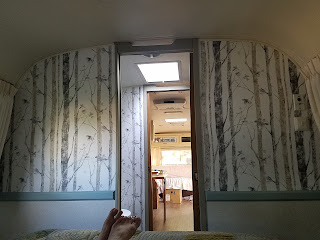 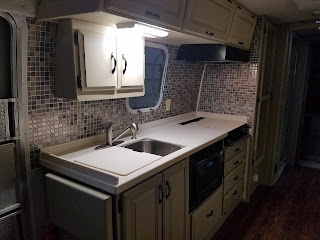 Hard to believe it's press on
The last project was the desk.  We removed the dinette and sold it to The Dry Campers - well, actually used it to pay for some of our solar installation. :)  A good friend built a custom desk and I painted it. 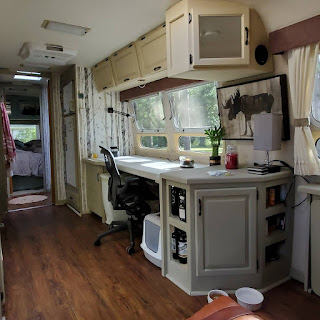 At this point we were ready to move in. Over the summer we had sold our house and most of our stuff.  We still had some issues with where to put what we wanted to keep.  I'll save that for my next post.
Now it's time to enjoy this lovely park.
Take care of yourself and each other,
Cate
Posted by Cate Sword at 2:40 PM

Cate Sword
who knows today, United States
Dennis and I have started a new adventure. In 2020 we sent our only child off to college. Sold our house and most of our possessions. Bought a Silverado truck and a 2001 31' Airstream and hit the road. This is our story.