Purchase and pick up

Our move to living full-time in an Airstream has had so many ups and downs that our friends have suggested I write about it.  Yes, I should have started the minute we brought it home, but I didn't.  So today I'm going to start journaling what's going on.  But first I need to go back in time and journal what we did to get here.

Starting in the fall of 2019 I began researching online looking for the perfect camper.  I knew I wanted an Airstream and I knew it had to fit in our budget.  I wanted to keep the total for both the truck and camper around $50,000.   That's seemed almost impossible.

I had an idea of the layout we wanted. We didn't like the rear bathroom because the bed was much to small for the two of us but other than that we looked at every model. I scoured Airstream Classified, RV Trader, FB Marketplace and Craigslist every day for months.  It was frustrating when I would find the perfect camper on the west coast because I knew it would be more to trasport it home than to buy it.  Eventually I found one in Florida that seemed about perfect, a 2001 31' Excella wide body with a rear bed.

Buying something for that much money sight unseen is scary.  I asked the very helpful people on the Airstream Forums page what to do to make sure it was a good purchase and they gave me the name of an inspector in Florida who really helped us out. He gave a full report, found some issues (in hindsight, missed a few - but not many) and we negotiated the price down to cover the repairs.

But there was still a problem, we didn't have a TV (tow vehicle).  I set my two amazing brothers to work on this one.  They are car geeks, they love old cars and fixing old things.  If anyone could find us a great vehicle Norm and Rich would be the ones.  Sure enough, they found the perfect truck outside of St. Louis, a 2004 Silverado Diesel 2500 with low miles and in great shape.  The thing was the dealer knew it was a great deal and we had to pay cash for him to hold it for us.  Again, pretty terrifiying buying something sight unseen. Norm assured me with his research and insight that it was the right thing to do and we did it!  Wired the money to them and then had to figure out how to get it.

On Feb. 3 we flew to St. Louis.  I had booked the night at Americas Best next to the truck dealership in Eureka MO, I thought, but it turns out there is an Americas Best in Eureka CA as well!  Yes, I had booked the wrong hotel; (hard to believe I travel for work all the time).  We stayed at the airport Marriott that night took an Uber to the dealership in the morning and by noon had our first truck!

We drove to Macon GA en route to pick up the Airstream only to realize I had booked us at the WORSE hotel ever.  I was trying to save money and had grabbed a budget hotel.  YIKES! I can't even describe how nasty the room was. So at 2:00 am I called around and found a Fairfield for the night.

Next day we drove to Tampa to pick up our new camper.  It was what we expected, except it felt smaller and dirtier.  Photos can be so deceptive.  I paid the owner and we hooked up. 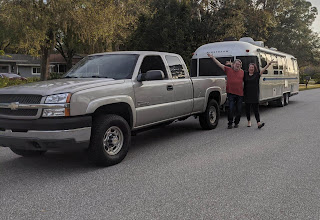 Our first photo with the camper

The truck's trailer brakes didn't work but we took off.  I called ahead along our route and found someone who could install a new brake controler.  With a small detour and some time spent in a tiny town in Georgia we were back on our way.

We spent our first night at a Cracker Barrel in Georga.  It was hot and we had no idea how to open the windows. The batteries were dead and we had no water but it was ours!  We bought some ice, beer, candles and food. 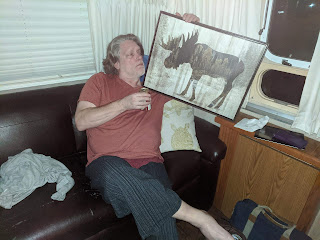 The next day we drove most of the way to Michigan.  By mid-afternoon it started to snow. The second night we spent at a rest stop in Ohio.  We had no idea how to turn on the heat and we froze.

We drove into Woodland Airstream mid-afternoon Feb. 7th.  I went over a huge list of things to fix, replace and add with Erich the service manager and left our new camper with him.

We had done it! Bought an Airstream and truck for under $50,000. Now the work had to start.

Cate Sword
who knows today, United States
Dennis and I have started a new adventure. In 2020 we sent our only child off to college. Sold our house and most of our possessions. Bought a Silverado truck and a 2001 31' Airstream and hit the road. This is our story.